On Tuesday, March 7th, from 9am. – 5pm. at Big Medicine Studio, Dan and Eva Couchie will be facilitating a workshop on processing wild meat. Dan will be taking everyone through the process of skinning, fleshing, and stretching a beaver pelt onto a board in preparation for tanning and processing the meat for food. This workshop will also include the plucking and preparing of geese and duck for cooking. Eva will lead us through the canning process of bottling both geese and beaver with a pressure cooker caner. See you all there! 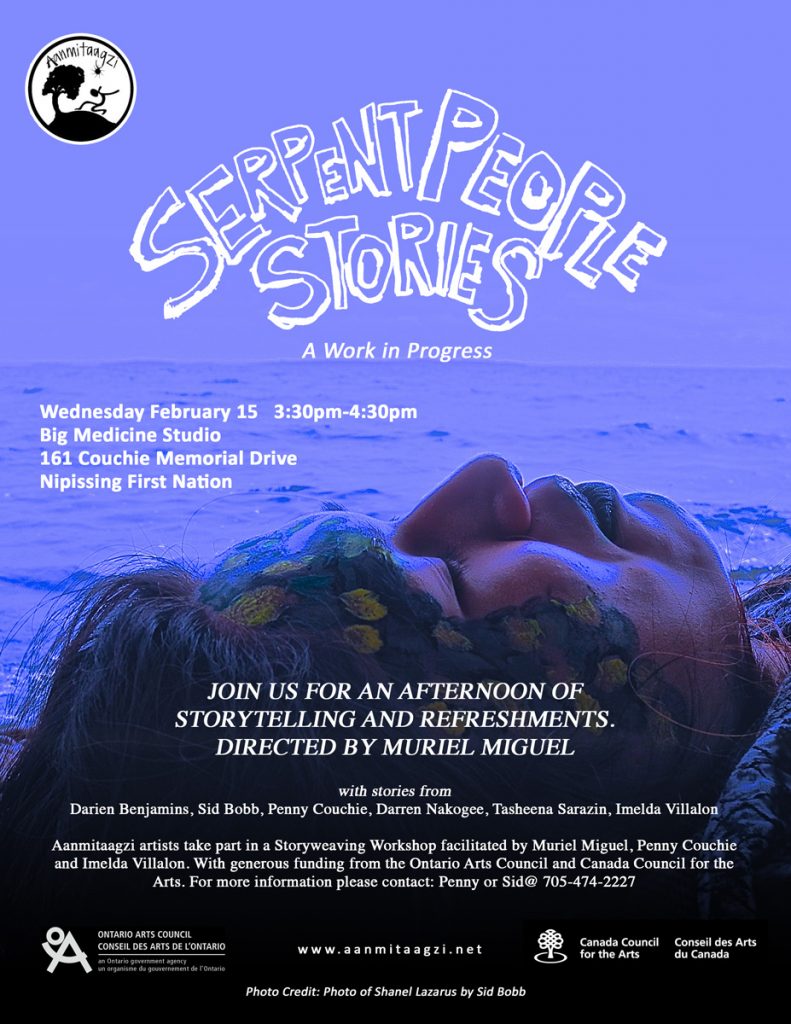 A Work in Progress

With generous funding from the Ontario Arts Council and Canada Council for the Arts
For more information please contact Penny or Sid @ 705-474-2227.

Happy Winter!
Please join us this Wednesday Dec. 21st from 6-9pm for food, music and performances from our newest show in development, Serpent People. 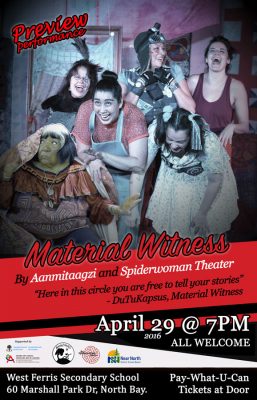 Aanmitaagzi has partnered with Spiderwoman Theater of New York to co-produce the multi-disciplinary theatre work Material Witness. This project brings together three generations of performers to share and explore their stories of violence against Aboriginal women. Their shared approach embraces art and stories created by, for, and about their families and communities in a multigenerational context. Development phases for Material Witness took place at Big Medicine Studio in Nipissing First Nation in 2012, at the historic LaMaMa Theater in New York City in 2013, in Nipissing again 2014, and at the Red House Centre for the Arts in Syracuse, New York in 2015. Community-engaged workshops, led by Sid Bobb, Penny Couchie and their artist team, were held in all locations, and two four foot by eight foot Story Quilts were created for the performance with the communities of Nipissing First Nation in Ontario and Onondaga Nation in New York. This multi-faceted project has led to inter-nation, multi-disciplinary and community focused art making and dialogue that brings us all together as a community to examine and address the dark legacy of violence against women.

New York City’s Spiderwoman Theater is the longest running Native American women’s theater company in the US and perhaps the world. Founded in 1976, they provide unique theater production, training and education which address critical cultural, social and political issues of concern to the Indigenous, Two Spirit and women’s communities. Their work bridges traditional expression and contemporary performance practice. The year 2016 marks the 40th Anniversary of Spiderwoman Theater and it is fitting that they should be celebrating with the premiere of Material Witness, a project inspired by their first production, Women in Violence.

Welcome to our website, our main method of communication beyond the physical connections we make through our community arts engagements.

We hope this website helps you to understand more about us and the work we do. Most of all we hope to inspire you to come engage with us!